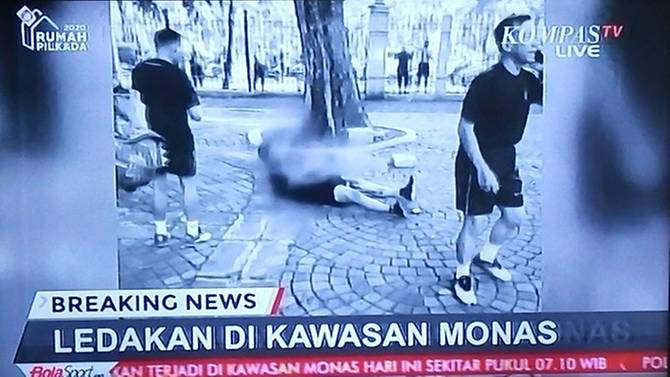 JAKARTA: Two military officers were injured after a blast in the area near the National Monument Park in the Indonesian capital on Tuesday (Dec 3).

“We immediately secured the area,” Jakarta police chief Gatot Eddy said in a press conference, adding that the blast occurred at the north side of the park at around 7.15am local time.

The officers who were doing exercises in the park at the time, suffered injuries on their arms and legs and were rushed to the hospital, he said.

The blast is believed to have been caused by a smoke grenade, the police chief said, confirming that investigations were ongoing as to where it came from.

Responding to questions, Gatot said there was no indication of an attack.

“The effects of a smoke grenade are not big. But it does explode. That’s what happened this morning,” Jakarta military spokesman Colonel Zulhadrie told reporters in Monas at a doorstop.

“This can happen anywhere. That’s why people need to be alert and immediately inform authorities if they see something suspicious,” he added.

“This is not a big matter. We are still gathering information and once the injured officers are better, we will question them while asking witnesses on the ground,” he added.

Jakarta’s traffic police tweeted that roadblocks were being set up to check commuters and traffic in the area.

Within three hours, authorities had reopened the park area where the blast took place, across the street from the headquarters of Indonesia’s home ministry.

Jakarta’s National Monument (Monumen Nasional in Indonesian), commonly abbreviated as Monas, is located in central Jakarta. It is located near Indonesia’s Merdeka Palace, as well as various ministries.

President Joko Widodo was not at the palace at the time, a presidential spokesperson said.